Sample from an impact test.
Photo Courtesy of BYK-Gardner.

Every material has its purpose, and every purpose has certain properties it requires of its materials. Phone cases are designed to prevent a phone from breaking when dropped, requiring that the case be impact resistant. Materials used for the casing of a laptop computer must be hard enough to protect the electronic components, as well as scratch resistant, otherwise it will start to look old and abused in no time. As consumers we expect a lot from the products we purchase, and as time goes on and technology improves we tend to expect more and more. This makes it especially important for manufacturers to test their materials to make sure they meet the specifications for the product being built. But which test to use? Here we will review some common methods of materials testing.

Two important properties when it comes to the durability of a material are hardness and impact resistance. These may sound like the same thing, but are in fact different properties with different testing methods. Diamond is one of the hardest materials known to man; it resists being cut or scratched, and is capable of cutting most other materials. Drill bits are often tipped with diamond to cut through very hard materials that might warp metal. As hard as diamond is however, it is fairly brittle. Scrape a diamond along a brick wall and there won’t be a scratch on it, but smash a diamond against that same wall and it will shatter. This is because although diamonds are very hard they have low impact resistance. Impact resistance testers (or just “impact testers”) work by dropping a heavy object from various heights directly onto the material being tested. The “amount” of impact is given in inch-pounds, which is a unit of energy, and is calculated simply by multiplying the weight of the object being dropped by the height it is dropped from. Impact testing is a destructive measurement, as in order to see where a material’s breaking point is it is necessary to break the material.  When testing for impact resistance, tests are performed multiple times with varying numbers of foot-pounds to see where the breaking point is. This method is also used on coated surfaces to see how well the coating performs after being impacted. Does the coating shatter or peel away from the substrate after impact? Does the color or appearance of the coating change? Does the coating help improve the impact resistance of the material? These are all things that can be determined using an impact tester. Click here to view impact testers. 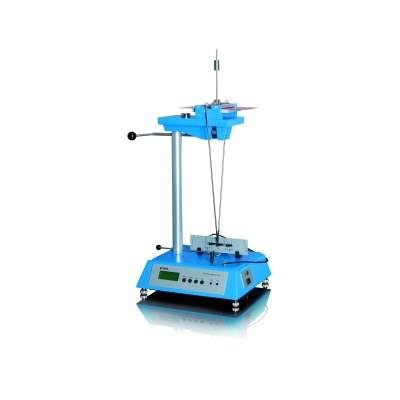 For destructive hardness testing there are two popular methods; the pencil hardness tester, and the DUR-O-test. Pencil hardness testing is done by using pencils with “leads” (actually graphite) of different hardness. The pencils are rated from softest to hardest. To perform this test a pencil is chosen, the tip sharpened and then dragged across the surface of the material being tested. If the pencil scratches the surface, the test is repeated using a pencil with a softer lead. If the pencil does not make a scratch, a harder lead is used. The idea is to determine the softest pencil that will make a scratch in the surface. A device called the “Wolf-Wilburn pencil hardness tester” was designed to hold the pencil at a specified angle and apply a consistent pressure as the pencil lead moves across the surface of the material. This improves the accuracy and repeatability of the test over performing the test freehand. The DUR-O-test is similar to the pencil hardness test, but works on a slightly different principle. Whereas the pencil hardness test varies the hardness of the pencil leads but keeps the force between the pencil and the material’s surface constant, the dur-o-test uses a single tip but varies the amount of force between the tip and the surface. The DUR-O-test consists of a tube with a spring and a metal tip. The spring applies force to the tip, and can be compressed by various amounts in order to vary the force being applied. To perform the test, the spring is compressed to provide a specified amount of force, and the tip is pressed against the surface and dragged across it. If the tip makes a scratch the spring force is decreased by lessening the compression on the spring, and the test is repeated. If it does not make a scratch the spring force is increased by compressing the spring more and the test repeated. The idea is to find the spring force at which the tip just barely makes a scratch. The spring in the device can also be changed in order to provide different ranges of force. Click here to view hardness testers. 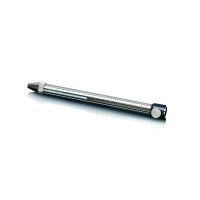 These types of materials testing have a wide variety of uses in industry. They can be used in formulating new products, to determine whether the formulation needs to be changed to meet certain specifications. They can be used for batch to control to make sure a material was manufactured to the desired specifications. They can even be used by scientists to test the properties of a newly invented material. In this modern age of rapidly advancing technology, where consumers expect their products to look better, feel better, and last longer, materials testing has never been as important as it is today.