The line between having leftover paint and not having enough to finish the job is thin.  Being on the right side of that line is of vital importance to the modern paint professional.  The cost associated with an extra gallon or two of unneeded paint can be the difference between a profitable job and a waste of time and money.   Compounding the issue is the fact that many painters lack visibility to the company’s bottom line; they don’t realize that using too much paint on a job can cost their company a significant amount of money.

Robert and Ross owned a paint company in Little Rock, Arkansas.  They were hired to repaint a recommissioned manufacturing facility on Interstate 40.  The timeline for the job was two months and part of the contract was that they would be able to display signage for their company right outside, essentially getting a billboard along one of the country’s most traveled interstates for free.  The pair were excited and ready to get to work. Unfortunately, neither Robert nor Ross had ever calculated the quantity of paint needed for a job of such magnitude.  Even after reviewing build plans of the space, they still found themselves scratching their heads trying to determine exactly how much paint would be required to do the job correctly.  The sheer enormity of the task at hand seemed insurmountable.

Robert and Ross’s problem was far from unique to them; many painters are familiar with calculating paint volumes for smaller jobs but are woefully unprepared to determine the necessary quantity of paint for a large scale job.   Unfortunately for Robert and Ross, and for many professional painters like them, larger jobs are where incorrect calculations can add up to the biggest wastes of time and money.

A simple paint calculator like the one below can provide a fair approximation for a small job like painting an individual room in a house.  Since paint is most often purchased in full units (gallons or quarts), calculations for smaller spaces don’t have to be as precise as large jobs; having an extra half gallon of interior paint left over isn’t the end of the world.  There are mobile applications and online tools that can help calculate paint for many jobs. However, these tools are often not exact enough for large scale jobs.

Potential financial catastrophe exists on larger jobs, however, where an inaccurate calculation can result in dozens (if not hundreds) of gallons of unused paint being left over once the job is complete.   Aside from the financial loss associated with excess supply, additional time and resource must be used to address disposal of the unneeded material. Further complicating the issue is that other materials like rollers and drop clothes are accounted for as a result of how much paint is expected to be used for a job.   If the paint calculation is off, then there is likely to be an excess amount of these consumables as well. The pitfalls of a miscalculation are abundant. 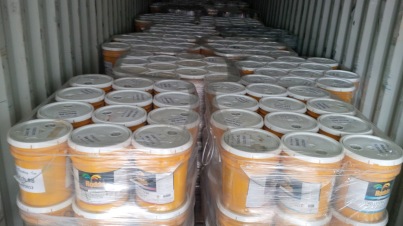 So how do Robert, Ross, and other professional painters find a way to accurately calculate necessary paint volumes on large jobs?   Not surprisingly, there are no shortcuts.   Calculating the paint requirements for a large job like an aircraft hanger, warehouse, or industrial complex is similar to calculating paint requirements for a spare bedroom.  The total square footage must be calculated, the texture of the wall must be accounted for, and a slight overage should be factored in for non-avoidable waste and attrition.

The key to planning for a large scale paint job is to have wall and ceiling measurements that are as exact as possible.  The most accurate way to estimate the exact amount of paint required for a job of any size is to have accurate measurements of the surface you’ll be painting.  Build plans are a great place to start, but there is no substitute for an onsite visit that includes time for you or your team to measure the actual physical dimensions of the area you will be painting.

What happened to Robert and Ross?   Fortunately, their story turns out well.   After asking colleagues in the commercial paint sector for advice, the pair finally decided to spend three days on-site at the facility planning for the job.  They worked together to measure walls and ceiling heights and diligently double-checked every detail before arriving at the paint volume required for the job.   They finished the job on time and on-budget… and with only a gallon and a half of paint to spare.

Click Here to see the tools and instruments offered by BYK to insure you aren’t wasting paint both during and after the job.