To a person uneducated about the nuances of commercial painting, measuring coating thickness may seem like a simple and straightforward task.  In reality, there are a variety of ways to measure the thickness of an applied paint or coating. 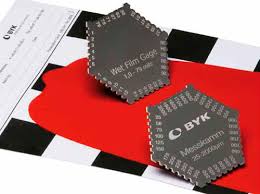 What is coating thickness measurement?

As the name implies, coating thickness is the measurement of the amount of a paint applied to a surface.  Because paint changes from a liquid to a solid as it cures or dries, the thickness can vary a great deal between the time of application and the point at which the coating has dried completely.   Furthermore, coating thickness will also vary as a result of the surface type to which the paint was applied.  Even with the same sprayer or brush, coating thicknesses may show a large variance between a resistant surface (like glass) and a surface that absorbs the material (like wood).    These same variables can also help determine which available method of measurement is most likely to produce accurate results.

This article will briefly describe a few of the different ways to measure coating thickness on different surfaces and substrates.

Magnetic Pull-Off Film Thickness Gage – The Magnetic Pull-Off Gage uses a magnet and a graduated scale to measure non-magnetic film thickness on metal and steel surfaces.   The magnetic pull-off gage is placed against the surface and is then pulled away.  A measurement of the amount of force required to remove the gage from the metal surface is used to determine the thickness of the paint or coating; a thicker paint or coating will require less force to remove the magnate.  Like the wet-film thickness gage, the magnetic pull-off film thickness gage is a lightweight and inexpensive measurement tool that can be used repeatedly.

Ultrasonic measurement – Coatings can be measured using ultrasonic devices that, while not as accurate as electromagnetic methods, produce measurements more precise than tools like the wet film thickness gage and magnetic pull-off gage.   Ultrasonic measurements occur when a pulse is sent from a probe through the coating until it is reflected back by the substrate underneath the paint.  Once this echo is received, it is digitized, analyzed, and measured to determine the thickness of the coating.  This ultrasonic method is particularly useful for non-metallic or non-magnetic painted surfaces requiring a non-destructive method of thickness measurement.

Destructive testing – There are also a number of available measurement methods that include destroying the product.   While this is sometimes necessary to receive an accurate thickness measurement, destructive testing should often be a last resort only if one of the many other measurement methods is insufficient.  One example of destructive testing is to cut a cross-section out of the item being measured and then quantify the thickness using microscopic testing.  In addition to the damage done to the item, this type of testing method can be less reliable than other methods due to the many opportunities for human error as the sample is handled.

Knowing the different available methods of coating thickness measurement and deciding which method to use can be the difference between a job well done and an unsatisfied client.   Proper measurement is essential to insuring product quality and controlling costs.    By using one of the methods above to measure and monitor the thickness of your applied coating, you can confirm that the correct amount of paint has been applied to the substrate.   Click here to see the wide range of film thickness measurement tools available from BYK!